The Beat Goes On In Manchester by Verity Welch

There are lots things children want to learn such as reading, writing and making friends. But there are also less useful skills, which I for one wish I had mastered. Such as whistling, clicking my fingers and clapping games. I have to admit that even now I sometimes feel embarrassed by my lack of playground skills and my general sense of rhythm. As a child, I found solace by playing imaginary games and soon found other children would happily join in with my roleplaying activities.

However, at Childcare Expo Manchester I found out that it’s never too late to learn. I arrived at Manchester Piccadilly in ‘The Apprentice’ mode, pulling my suitcase on wheels. After leaving my hotel in the impressive Media City, I went to the Expo to find my colleague Alex had set up the IEYC stand and was already in deep conversation with some interested nursery heads. My short time in Media City had inspired me to imagine that I was a finalist in ‘The Apprentice’. It gave me the energy to give out leaflets and promote the IEYC.

In my head, there was a TV camera filming my performance and Sir Alan himself commenting, “She’s a grafter… and passionate about her product… I like that!” 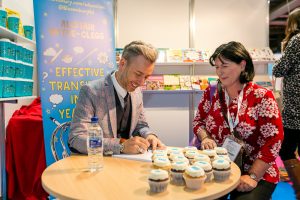 I was shaken out of this fantasy as I realised that our stand was next to Bloomsbury Books where Alistair Bryce-Clegg was sat signing his new book on transitions. I’m a fan of Alistair and wanted to run over to meet him but my confidence dipped and I started to imagine that I’d put two fingers into my mouth to produce the sort of piercing whistle that would stop a cab or get Alistair’s attention.

An independent games inventor popped by called Graham who demonstrated his maths EYFS game to me. He had created a box of maths games and we had a great lively discussion on the way children learn and other resources out there that enhance learning. Suddenly I was on ‘Dragons Den’ deciding whether I was in or out.

Alex and I also had an excellent conversation with “Balance Buddies,” a company that makes balance bikes. These bikes are very popular with my younger nephews and nieces and support balance and coordination skills beautifully. I regularly get updates from my brother and sister in law of their three children gliding down paths complete with mini helmets. If your nursery doesn’t have some then I definitely recommend them. I wish I had one as a child.
My media musings returned as I noticed the stand directly opposite us provided software and screens to schools and universities. There was a mini screen which was literally filming everyone who went by. This meant that Alex and I were on the telly for most of the day. Surprisingly it meant that we worked extra hard as we felt that we were being watched. 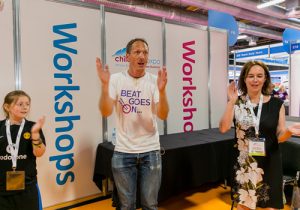 And we were, as Ollie Tunmer, Director of “Beat Goes On” and former performer in the West End show ‘Stomp’ strode over. He invited me to attend his workshop on body percussion which was pitched to support early years. I was apprehensive about joining in but the workshop was great fun. We made a circle and learnt a variety of different rhythm games to perform to each other. Eventually, I was partnered up with a nursery practitioner and a miracle happened as I found myself clapping, tapping and jumping in time. Something as simple as performing a set of movements to an audience was my highlight of my day.

As I reflected on my experience with Alex, she rightly pointed out that I was totally in the moment during the workshop performance. There’s nothing wrong with an over active imagination but this active physical activity increased my wellbeing and confidence. Now I feel I could finally attempt a game a ‘Pat-a-cake’ and maybe even whistling and finger clicking might not be beyond me.

I personally thought the event was wonderfully organised – a full singing, dancing and active experience.

Another great day out at Childcare Expo by Jo Baranek

About Early Years by Sarah Neville
Scroll to top
LONNORMID