Spike, the Hedgehog Who Lost His Prickles 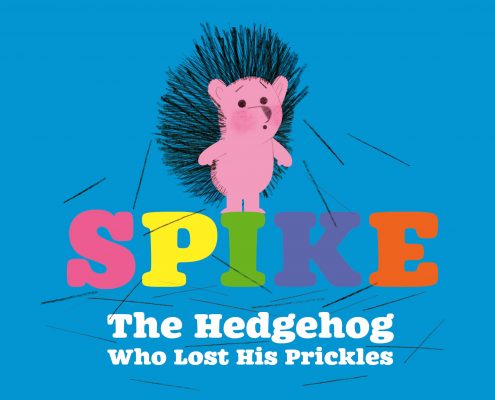 In this curiously funny picture book, Spike, the cute little hedgehog, suddenly loses his prickles overnight – ‘He hardly recognised himself, all spineless, soft and pink.’  If you’ve ever wondered what a hedgehog would look like without his spikes then be prepared to find out. Unfortunately, he does look a little silly!

Children will giggle at the cheekiness of Spike and his calamitous situation – ‘I’m in the nude. How rude!’ he blushes.  To hide his embarrassment, Spike attempts to cover up with hilarious consequences.  A lampshade, china plate and cup, holey sock and balloons are all used, but with limited success.

The balloons in particular cause a spot of bother for Spike. When they lift him into the air and float him away, we can’t help but fear the worst for him. Where will he end up? Twice around the world, over snowy mountains, through the moonlight and across steamy jungles until…POP!  Luckily for Spike, there’s a brilliantly happy ending to his prickle-less adventure.

The rhyming text in ‘Spike’ makes this a fabulous book for reading aloud. With simple but humorous illustrations and an excellent story-line, there’s plenty to engage children and hold their attention.  Featuring bags of humour, mostly at the expense of poor Spike, there’s lots to discuss around feelings and empathy.  He is such a loveable character that this book will definitely become a favourite at home or in the classroom.

Cue echoes of “again, again!” when you reach the end!