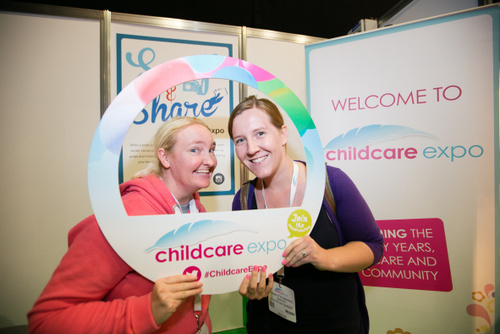 If one word had to sum up Childcare Expo Midlands last week it would have to be ‘buzzing’. The early year’s community flocked to Coventry’s Ricoh Arena for the two day exhibition which was packed with features from informative seminars to interactive workshops and left visitors with their heads bursting with new ideas and bags brimming with bargains.

Interactive Workshops at Childcare Expo Midlands 2015Event director Emma Barrett said “It was great to once again bring together so many dedicated suppliers with such passionate early years professionals. From the VIP Early Years Breakfast Summit that took place on Friday morning up until the close of the show on Saturday afternoon, we had such fantastic feedback from both our visitors and exhibitors who all helped to make this event a great success.”

First time exhibitors Spectrum Healthcare commented that the event “was extremely well organised and we were made to feel ‘at home’ with everyone” and exhibitors The Nursery Press told organisers Broadway Events “a big thank you to all your team for organising a great show. You really look after your clients and that is very much appreciated.”

Visitors Caroline Wood, manager at Daventry based Dolphin Day Nursery and her deputy manager Charlotte Manning said they “come to the event every year as it really inspires us and our team”. Caroline visited on the Friday to attend a variety of seminars including ‘Preparing for Ofsted’s Common Inspection Framework’ and brought the rest of her team on the Saturday commenting that they “all come to the event together as it is a great team building opportunity”. Caroline and Charlotte also explained how helpful it was to see resources laid out in the feature areas to give them an idea of how to re-create this in their own nursery and that they were looking forward to carrying out the practices they learnt at the shows workshops and seminars at their own settings.

Dolphin Day Nursery at Childcare Expo Midlands 2015The Dolphin Day Nursery team also had some fun at the end of the day in the Snap & Share Zone which was a hit with both visitors and exhibitors who had the opportunity to try on props and snap a few selfies to share on social media. One visitor who was in demand for photo opportunities was sponsors Morton Michel’s mascot Morton the bear, who enjoyed discovering the innovative resources and services being showcased at the event but also made time for some bear hugs throughout the day.

Childcare Expo will be returning to the Ricoh Arena on the 30th September and 1st October in 2016 but before then, the exhibition will run at Olympia in London on 4th & 5th March and launch at a new location of EventCity in Manchester on the 17th & 18th June.