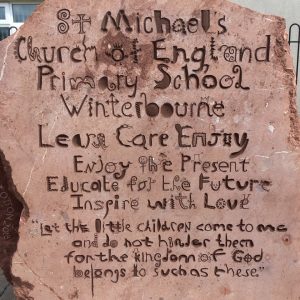 I have recently been involved in working with my artist husband on an art project with children. My role was to support the children’s participation. Before I became a freelance trainer and consultant I worked in children’s participation for a large children’s charity, as part of this I worked on lots of art projects with artists and children. This project was for St Michaels Primary, Winterbourne, Bristol, my husband, Iain Cotton,  is a sculptor and letter cutter.

We had many discussions about how we could involve the children in a meaningful way, this project was 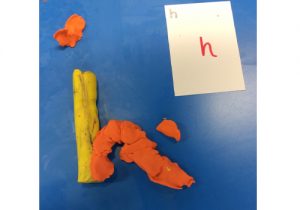 about inspiring the children to think about how letters are formed, about designing and creating. We wanted each child to design their own, unique letter.  The plan was for Iain to carve each individual letter onto the stone. One of the challenges with this idea is, of course, the varying ability of the different ages. It was important to us that every child was able to participate, however, we recognised that designing letters could be a real challenge to some of the 4 and 5-year-olds. From previous participation projects, I knew that plasticine was a great tool to use with children, it holds its shape 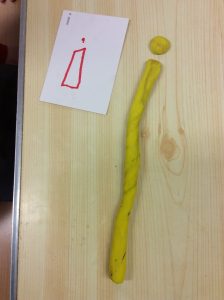 well and children are able to be playful with it. With the children in reception and year one, we gave each child a letter which was in their name. This was important as they would be familiar with the letters in their name and were likely to be used to writing it. We knew for the children in the lower years it would be a challenge to design a letter, but our hope with using plasticine was that the children would be encouraged to be more playful with the material and this would come through in the letters they made. The children in the older years designed their letter with felt pens. The children loved working on this project, the younger ones really enjoyed working with the plasticine and it enabled them to be creative.

Once all the letters were designed, Iain then carved them into the stone. The piece is now finished and in place at the school. The whole school are delighted at the finished piece, children were joyful when they identified their own letters.

Why You Need To Teach Your Child To Draw

BABY & MORE HAS EVERYTHING A NURSERY NEEDS….AND MORE!
Scroll to top
LONNORMID