Got myself all excited there for a minute when the postie walked up the drive: until I saw him brandishing 2 long thin parcels which definitely couldn’t have my new motorbike helmet, boots & Kevlar pants inside [sigh]. It could only mean one thing – more exciting new resources for the kids. It’s become such a thing here that opening the parcels has become an activity not unlike opening an advent calendar. You know, where instead of having half a dozen chocolate Disney ones melting across your radiator cabinet in your hallway you have one super duper one and each day a child takes a turn to pull out the drawer and they always get something cool like tattoos, lego bricks or a pot of dough. Well, with the parcels it’s kinda pot luck whether kids take delivery of a book on early childhood, a year’s worth of teaching magazines or a fabulous water wall. On the plus side, we do get to open the door about 6 times a day so we’re bound to get something fun eventually aren’t we? Still, the kids here are learning to manage every emotion on the spectrum: from major disappointment to pure elation –  who’d have thought that the humble courier could have such an impact on children’s personal, social & emotional development? Seriously though, opening parcels is becoming so routine here that parents needn’t ever bother recording their little treasures opening their birthday presents again – their lack of enthusiasm will be like a stake through the heart.

So what was in the boxes then? Hope Education’s swamp play tray mat and the water and slime proof swamp mat that’s what! The quality of the print is beautiful and the mats are very durable. Now, my old ‘play tray’ isn’t actually a play tray at all – it’s just a good old builder’s tray that we used for mixing the cement for the walls for our raised beds long before I even considered becoming a Childminder. As such, its dimensions are about 50mm smaller than that needed for Hope Education’s play tray mats. However, if this is the kind of tray that you have then the mats would be easy enough to trim to size if you don’t want to go to the expense of buying a new play tray. Fortunately, though, Hope Education also sell the play trays. 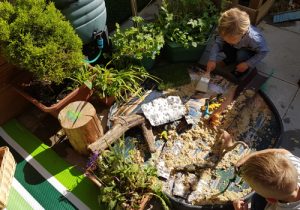 It’s funny but when we laid the vinyl swamp play tray mat inside my builder tray the first thing the kids instinctively did was get the hose-pipe out and fill it up with water. And whilst doing this, one clever little sausage went and dragged the animal box over and started tipping them in until, that is, one piped up that tigers and mammoths don’t belong in water and they started sorting out who should live in the swamp and who shouldn’t. When one dropped a spade full of wet sand into the tray it wasn’t well received at first. But after the third load they seemed to realise it was actually pretty cool. Soon, compost and bark also found its way in there and it was gloriously messy. I’m so glad I put the tray right next to the mud kitchen. My only regret is not getting a cover for the play tray because when full of water, wet sand & soil and rocks it was impossibly heavy to move it at the end of the day without disturbing the children’s project which they’d definitely want to come back to after the weekend.

As for the water and slime proof swamp mat, it’s a much thicker fabric than the swamp mat and we put that in my old builder tray in the water area. In 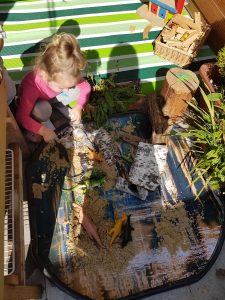 hindsight, I’d have done it the other way around. Anyway, you can buy gobbledy-goop and messy play slime from Hope Education but we didn’t have any of that to hand. Instead, on the shelf nearby we have a container of corn starch with scoops, two water dispensers, ready mixed paints in old hand gel pump dispenser bottles and buckets of whisks, spanners, forks & plant stakes. There’s lolly sticks, corks and twigs; bark, fir cones and dried sea weed. We punched holes into the corners of a new batch of sheets of paper, tied them together with string and hung them from a hook in the fence because…well…who knows what could happen right? Of course, multi-coloured gloop is a red rag to a bull for a crawling baby and until we lifted her out the kids’ reactions varied from entertained to exasperated, depending on their level of tolerance. Great, now they could get on with their work.

I love watching and listening to children: how they manage tasks and responsibilities: “you go and get the lids while I fill these pots up”, “can you just hold this here while I squash it down”, “will you mix some more in for this bit please”, “will all of this fit in here”, “why doesn’t this look boggy enough yet”, “why won’t that stay up”, “how can the crocodile get in there”, “why isn’t this sticking”. The ideas, the questions, the motivation – enquiry-based learning at its best. All I had to do was stand back and observe. 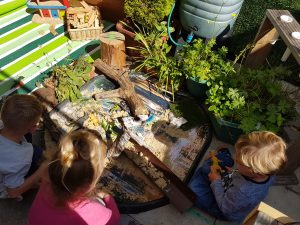 Now I’m not implying for a moment that none of this learning could have emerged without the play mats but what they did do very effectively was suggest a group project to collaborate on. I didn’t have to plan anything or make any special resources available. Any accessible and enabling environment with a selection of open-ended resources and loose parts is ready. Remember Malaguzzi’s “to work with passion means to keep the head and the heart in contact”? Well, work with passion they did. Why hadn’t I expected them to build a bridge from the log slices and off-cuts of decking so they could cross the alligator swamp? To shorten garden canes with a hacksaw to make little teepees for the animals? To pour marbles into the gloop and lift the tray up from the sides to move them around and make patterns? To use scrapers to move gloop where they wanted it and house bricks for dams to try to keep it there. Oh the frustration and perseverance.

I’d find it extremely difficult to imagine that any early years setting doesn’t already have at least one play tray in their continuous provision but if not I highly recommend getting one. And if I had to pick a favourite play mat it’d have to be the water and slime proof swamp mat because I flipping love it!

Have you got a product you would like Andi to review for you? Get in touch with her today.

Playing with Food by Susan McGhee
Scroll to top
LONNORMID