I’ve been doing it now for about 26 years, since I qualified.

I think when you come to something like Childcare Expo you get to meet all the people that are doing that on a day-to-day basis. I think if you’re attending as somebody who actually works in the early years sector, you get to see what’s available, what’s out there that’s new, so many companies that have new resources, and also the chance to network and share ideas. So it’s a really nice place to come together and just share all of that information as a community.

The atmosphere is always good because you’ve got so many people who’ve come together with a common interest – there’s also always some nice freebies that are given away and people are excited to see what’s going on, get some new ideas and that kind of thing. There’s always a buzz, and the fact that there are also things like workshops and seminars where people can get some focused training, as well as seeing the new resources that are available, means Childcare Expo is always really successful.

Each sector is unique in its own right. Early years children are at the very beginning of their development, and so I think it’s a really crucial stage to absolutely get it right – because if you get it wrong at that stage it’s very difficult to try and catch up or to unteach bad habits, or to try and teach things that haven’t been taught in the first place. Also, when we’re in this really early stage of brain development, it’s a very precious time to ensure that we are helping children’s brains to develop by giving them a developmentally appropriate curriculum and activities, and that’s where you’re going to get the best outcomes. You also want enthusiastic and passionate learners, so if you turn them off learning in the early years, then you’re not likely to turn them on again in 2 or 3 years’ time; so it is a really important phase.

I spend a lot of my time (if I’m not delivering training) working in settings, and I think I actively do that because I really, really enjoy it – but also it keeps you relevant and it keeps you fresh. You can’t be somebody who steps away from the classroom, and then says 15 years later, “This is how I think you should do that,” or “Try this idea!”. So, most or nearly all of my writing comes from my observations of where I am and what I’ve seen. I also read a lot and that way I learn on a daily basis from other people, and then I have the really nice opportunity to try and put that into practice just through other people’s settings rather than my own. Then I can re-evaluate that, and you can go on and use that in your own way going forward – so it’s real life really that inspires my writing.

The bits I really enjoy are the seminars, because you get to talk to people about things you are passionate about, and then often there are lots of questions at the end – so you feel like you are actively helping people to find solutions to issues that they have. It’s just a really nice opportunity to have that interaction. 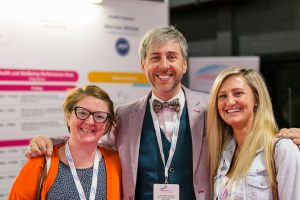 Oh, that’s a really difficult question! I love working with children and that’s because on the whole they are really honest and open, and really excited about life. They’ve got none of the cynicism that goes along with being an adult, there’s none of those issues – every day is literally a learning day and they are just full of the joys of being alive, so that’s really refreshing. I also enjoy working with other adults who have the same passion as me, because when you have a shared interest you have lots of things to talk about. So there are loads of elements in my job that I love, which is why I’m still doing it at nearly 50 and have no intention of stopping, because I just really enjoy “nearly” every day!

Fundamentally on this issue, I think what you want is the best person for the job, and their gender doesn’t necessarily mean that they are going to be that person – so just because they are male, doesn’t mean to say that you necessarily want them to be working within the early years. I think what we need to get better at as a sector is trying to dispel some of the myths around early years education; that people think it is just about reading stories, playing in the sand, or singing with your guitar – sometimes it is, and those things are very important – but also, there are a lot of strategies that go into early years and you’ve got to know an awful lot about child development, brain development, children’s play behaviours, etc. So I think partly, it’s dispelling that myth and showing that actually there’s an awful lot of rigour in the early years, and that proper teaching doesn’t just happen when they hit the junior years. But also really we just want the best people for the job, because if you recruited loads of men into early years and they found (regardless of their gender) that it’s not the job for them, then children are not going to get the best outcomes. So I think we can do a lot to try and make it more transparent, but fundamentally, the people who have got the greatest interest and the best talent are the ones that you really want, regardless of their gender.

I am not a fan of deep water. I’m not too great on boats that take me out into the sea or that kind of thing, I don’t like that. I wouldn’t swim in the sea, but I don’t have a pathological fear – I’m not someone who’s phobic about spiders or snakes or anything like that. I think my greatest fear though is when you have a family who are precious to you and who you love greatly – I’m really lucky to have an extended family who I’m really close to – so if I really think about my greatest fear, it would be to lose the people that are really precious in my life. But in terms of a fear of any “thing” … as far as I know, I haven’t got one yet. 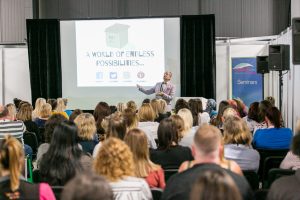 Well, I have this discussion regularly – I’m quite obsessed by who my dinner party guests would be! So I would certainly have Ant and Dec if they counted as one, and I reckon they probably do because they always come as a pair. Although not so much recently, but you know what I mean. I do sometimes think because they’re Geordies that they’re my friends, but they’re not. I should be saying things like “I’d have Piaget and Vygotsky”, but actually I’d probably have Ant and Dec as one. Then I’d definitely have Claudia Winkleman because she is a heroine of mine, I think she is absolutely amazing. If she was still alive, I would have had Victoria Wood because she has made me laugh my entire life and has very much influenced my delivery I think, in terms of being a public speaker, so I think if I could have someone back from the grave it would be Victoria Wood. But just for interest, my third dinner party member might be somebody like Judi Dench – because even though she plays this kind of Queen-like persona, I reckon there’s a really wicked side to Judi. So, Ant and Dec, Claudia Winkleman, and Judi Dench – fairly diverse, but hey, you’d be in for a good party!

I have loved it as always – I’m always well looked after, I meet loads of people, I always have aching cheeks by the end of it because I’ve done so much smiling, but it’s always great just to be able to come and share the things you are passionate about with people who are all so passionate too.

Childcare Expo will be returning to the Ricoh Arena 28 & 29 September 2018, along with some very special guests. Registration for Childcare Expo Midlands is now open! Get your free tickets here.

Saving The Planet and Their Future
Scroll to top
LONNORMID