We’ve been supporting families to create their own engaging outdoor play area for their children on a very tight budget: preferably, by re-using stuff from around the home, office, garage or garden. A good mooch around a charity shop wouldn’t go amiss either to fill in any gaps.

This came about after a concerned parent said that her children were having far too much screen time at home and that there were “meltdowns” when she tried to take away their tablets. She asked how we managed to keep the children “entertained” outdoors for so long? And this is what we told her: 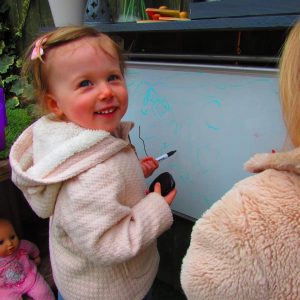 #1 – Attach two utility hooks to a fence and slide backing paper rolls onto an old, cut-down curtain pole or broom handle. And although it isn’t expensive, when you’re using a roll a day it does soon add up. So why not mix it up a bit? Tie a cable tie to each side of a dry wipe board and hang it from the hooks instead. Score extra brownie points if your dry wipe board is magnetic. We attached containers beside the “easel” to hold magnetic shapes, letters and numbers and dry wipe pens. They slide off the screws to be put away at the end of play.

This cost us just £1 and that was for a pack of new dry wipe pens. One parent replicated this using a flexible chopping board and attaching it to her fence with a staple gun. She already had the pens. Cost £0. Her two girls love it. 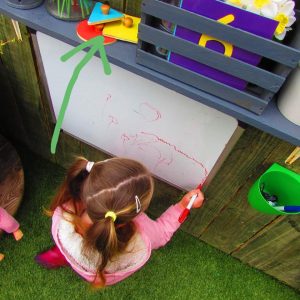 #2 – Same board but look. Create a shelf to have accessories to hand using any old bit of timber you can find. This is a leftover piece of fencing on 2 old brackets.  The carry crate was bought 2 years ago for £1. We found a few sets of never-used flash cards in the back of a garden cupboard and rather than take them to the charity shop we popped them into the crate. And I know everybody has puzzles with missing pieces. Well, we never throw them away because they’re great for drawing around. So we popped those on the shelf too. We’re at a point where we actually look forward to discovering an incomplete puzzle. Score brownie points here too by keeping the puzzle tray and attaching a bull dog clip for a sturdy clipboard. Parents said they’ll never look at “useless old toys” in the same way again. 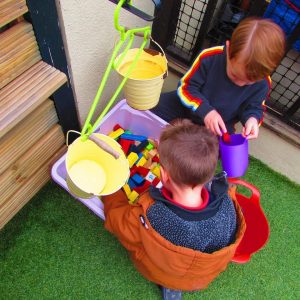 #3 – See the little boy with the stripes on his sleeve there? His Mum gave us that box of bricks because he’d had them for 2 years and never played with them and she thought the other children might like them better. We screwed a hanging basket bracket to a post. Hooked a clothes hanger onto it. Hooked 2 rusty buckets onto that and just stepped back to see what they did with it. The buckets were pretty useless if I’m honest as the shape of the handles is all wrong. They soon found that out and used them to transport brings around all over the place instead. Tipping them into other containers. Building with them in a space they chose themselves. Cost £0. We asked Mum if she wanted the bricks back. She didn’t. She was just glad they were being used. By her own son. 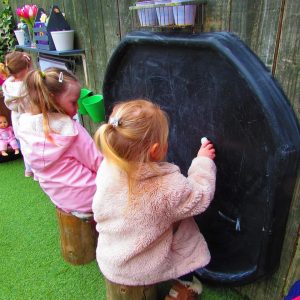 #4 – Fabric tuff tray inserts stick to astro turf like Velcro and make lovely little play mats: so what to do with the trays? Well, one edge has a tab with a hole to hang it up. So we hung it up from a screw and attached a tub either side of it for traditional chunky chalks and some neon chalkboard pens. The logs came from trees that were felled by the council last year and cost nothing. Spray bottles and sponges are in a flexi tub so they can clean the surface and start again. This was stuff we had around the place. One of our trays is actually an old building tray that was used to mix mortar to render our garden walls. Scraped out and cleaned, it’s as good as any other.

A parent wanted to copy this but didn’t have the money to buy a tray. I had a huge sheet of thick black polythene that I cut to 1m x 1m. Dad attached it to their fence and it works exactly the same. Cost again was £0 although I do recommend trying out chalkboard pens just so children can work with something new. 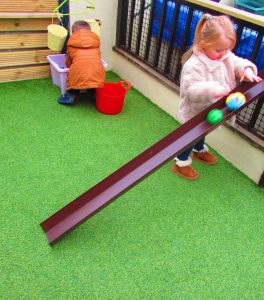 #5 – It is what it is. Drilled a hole in one end of this guttering pipe and attached it to the fence with an S hook.  Left a tub of balls and a tub of small world vehicles and let them get on with it. Watched them find out what rolled and what didn’t all day long. Watched them figure out how they could speed things up and slow things down too. They set up another one adjacent to it and had races. Even if you don’t have a spare piece of guttering kicking about, you can buy a length for less than a fiver and cut it into several pieces. Again, cost £0.

And how do we evidence any characteristics of effective learning and developmental milestones?  We take a photo; share the achievement with parents; suggest where we can take the learning from there; delete the image. Boom.

Fancy winning a bottle of Veuve Clicquot, a spa day for two & a giant teddy...
Scroll to top
LONNORMID