Kids take on the general election by Andi Turner 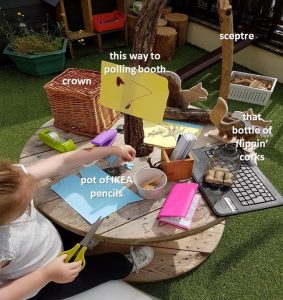 Now, you might find this an odd thing to say but our environment is very fluid. Where a bookcase was yesterday may have the tree stumps, log slices and branches today. Have children not used the outdoor natural materials maths space today? Swap it with the water wall for tomorrow. Was there not much buzz with the tongs, fir cones and egg trays provocation? Never mind, we’ll use it another day or pop it into a busy bag for a child to take home to play with his big brother. Ask Dad to take some photos and upload them to our sharing space maybe. That might seem a bit chaotic to some but changing the locations of activities “encourages children to explore new surroundings with their bodies and minds”. We completely value our space as our third educator and our roles as scaffolders and facilitators in each child’s learning. We make sure the loose parts are all refreshed, accessible, organised & rotated; the provocations are set up – not always in an obvious way – sometimes we hide them so that children land on them completely by surprise (amazing to see their little faces when they make the discovery); the boxes, bags, buckets, crates and baskets are all to hand so the kids can move everything around to fit their storyline. We plan so the space is safe but stimulating and there’s always room to keep things to come back to later. We take photographs of work in progress and share with the family throughout the day. Children love to look at these too and re-tell their day. What we don’t do is plan what children are expected to do with the stuff: that’s up to them and their imaginations.

This is how we plan for intentional play. At the end of each day we come together to discuss what we’ve all discovered and experimented with. Combined 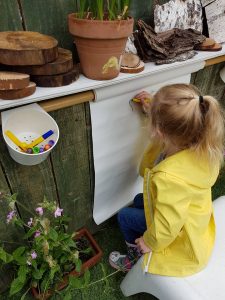 with what we recall seeing and hearing throughout the day, and any photos taken and notes or next steps we may have written on our dry-wipe boards, or our trones shoe boxes or our vinyl table covers or anything else available, the team then sets about re-organising the environment for the following day. It’s not written but it is no less well planned to be responsive to and supportive of children’s abilities and emerging interests.  What we’ll be doing is stepping back and watching and waiting as the children “discover, invent and explore”. What we won’t be doing is setting up a dental surgery role play area just because a kid went for a check-up today. Nope. The kids will make one themselves if they want one – they know that everything they’d need will be there and if it isn’t they’ll adapt something. Who’s never seen a kid use a block for a phone, a plant pot for a garage or a crate for a cot?

And this is what I’m getting to. We have an inquisitive and imaginative bunch and never has it been more obvious that they listen to every little single thing they hear adults say than today. So while I’m trying to get all the corks out that have been pushed into a water spray bottle I see Hollie sitting atop a cable reel with camouflage bird-watching netting draped around her shoulders and clipped together at the front with a clothes peg. She has a substantial branch in one hand and a clump of orange scented home-made play dough in the other. Oh, and she has the twig basket on her head. 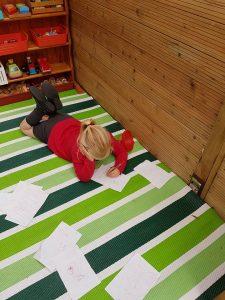 Hollie: “you have to do what I say because I’m the queen”.

Olivia: “no we don’t. Only the shouty people in the shouty house can tell us what to do. You have to stay in the palace and look after the baby Charlotte while we go and put a cross in anyway”. It’s gone uncharacteristically quiet. Confusion I guess. I listen on. I say nothing, I ask nothing. I’m just gonna watch this unfold and take a few photos and perhaps shoot a couple of short videos to share with our parents.

Olivia goes on: “Yeah, well, I’m going to the ballot now and it’s raining so I can’t take the kids out in that” and she takes Ben and Geri (our empathy dolls) from her hips and thrusts them into Hollie’s lap and off she goes. She soon scurries back holding a book over her ducked head. In her imagination, the rain must have been really quite a downpour. In fact, it really did pour down on election night didn’t it? Funny, I always had Olivia down as an Engineer like her Dad or a Teacher like her Mam but perhaps she’s more cut out for the stage…

Anyway, as I’m still trying to get my first cork out, Hollie says: “was it good at the ballot? Who won?”

Olivia: “we won’t know for ages and ages yet because they all have to be counted up. It’s not a dancing competition you know, Hollie”. (Is she thinking 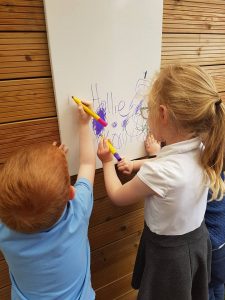 ballet rather than ballot? No, no way could she be thinking that…) Hollie is still sitting regally on her cable reel throne so her crown doesn’t fall off; pressing dough around Geri’s hand to make a glove I’m guessing but I could be wrong. I’ve been known to be wrong before. That’s why I say nothing. Olivia’s gone off looking through cupboards: “Andi, where’s the string?” she shouts eventually. I remind her it’s in the planter with the gardening tools. Soon after, she clears a workbench and starts gathering things together. She clearly has something purposeful in mind. Within minutes she has her string, scissors, paper, marker pens, traffic cones, stapler and a tin of tiny IKEA pencils (aaw come oooon, everybody grabs a handful. Don’t they?) She’s winding string around a pencil and it won’t stay on. Hollie, the bright little spark she is, leaves her throne and comes back with the sellotape dispenser and plonks it down without saying a single word. Olivia glances up momentarily and immediately pulls the string back off the pencil. Hollie holds the dispenser down tight as Olivia pulls a strip off. Still, not a word spoken between them. Olivia sticks the end of the string to the pencil and starts winding again.

Olivia: “Andi, is this enough?” I have an idea what she’s doing and so I suggest she’ll need about yay much, showing her my hands about a foot apart. She pulls the extra from the string and Hollie snips it with the scissors. Still, not a spoken word between them: they know each other so well. With another piece of tape, Olivia tries to stick the end of the string to the workbench but it just won’t stick to the wood and I assume she’s given up. She gets busy with the paper and pens. Just as I step away to observe the children in their makeshift greasy spoon I overhear Hollie: “what are you doing now Olivia?” And off I go.

Later, Olivia is “making signs so people know where to go to the poll”.

Hollie: “you can use this pole if you like?” holding out her branch which isn’t a sceptre any more apparently. 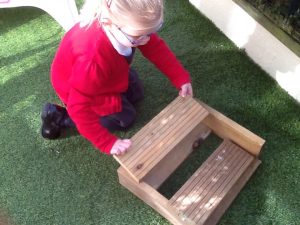 Olivia: “okay, I’ll stick my arrows on it pointing the way. Andi, how do I write ‘come this way please’?” I write that out word for word for her in pencil. She traces over the top, correctly telling me that three of those letters are in her name but only two in her brother’s name.

Olivia: “no, you’re not a busy worker. You have to just do nothing in your palace. Just listen”.

Olivia: “well, you’ll just have to not be the queen any more then”.

Hollie de-thrones and disrobes; leaves her orb and crown for somebody else to play with. After a full day’s work Olivia’s polling station with voting booth, ballot box, signs, voting slips and little pencils pinned to the workbench is complete – with a little help from Her Madge. We could have never imagined in a million years that those girls would want to act out British monarchy and democracy. And that’s why, even though it was election day, we had no need for one single pre-printed, laminated resource.

As for what went on simultaneously in our very own little greasy spoon well, that’s a story for another blog.