Old School – A Day off from Child Centred Play 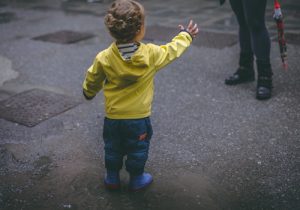 It had been a wet week in January; a high percentage of the Reception class was off sick with flu, including the TA. A snuffling Head Teacher asked if I could cope without support. The supply budget had been used up and anyone left was desperately needed in the upper part of the school. Feeling fearless and within ratio (if you discounted a possible SEN Child who hadn’t yet been ‘officially’ acknowledged), I replied, “of course”.

I was secure in my pedagogy; my children were generally active independent learners. All I had to do was relax and let them be as we worked well together. I was proud of them and I loved my role. We would still keep the door open. Children could float outside with brollies and hoods if they needed fresh air.  They would smoothly move around the room participating in activities, self-initiating their own ideas. I would place myself in the book corner and read with them individually. Every now and again I would sensitively intervene and scaffold their learning onto another level of enquiry.  It would be a relaxing day but much learning would take place because I was experienced and knew my children. They had settled in, were self-regulated and independent – all would be fine.

However within 5 minutes all my trust and confidence in my children was proved to be misplaced. Our new felt-tips pens were transported outside and pushed down a drain. Those with rain coats had decided they didn’t need them and were joyfully screaming as they showered under the leaking shed roof.  Others were jumping in puddles in their bare feet, odd wellies scattered in the door way – providing perfect potential trip hazards – whilst my collection of spare socks were rapidly disappearing. Some children were on the verge of tears as the additional freedom and lack of extra adult supervision overwhelmed them. But others were more than willing to take advantage.

An ever expanding group of children had decided to be monsters.  Squeezy paint and glitter was tipped out and smeared all over the tables, each other and the sinks. The bathroom looked like a crime scene from a CSI show. A toilet was blocked and as I rushed to deal with this calamity another child walked away from a sink, stuffed with tissues with both taps running. The architects in the block area turned away from their constructions as they discovered the how to use blocks to hit each other about the head.

By the end of the session I was shouting, I was cross and I was pleased to see them go home. The day was stressful, chaotic and ended in tears – not just the children.  The depressing day ended as I had to cope with angry parents who weren’t best pleased that their paint covered children were missing socks and footwear.  To complete my misery another child showed an old scar to their parent and claimed it had happened that day.  I felt like I was being punished for getting cross with my class – for the first time ever!  So therefore I deserved everything thrown at me. Plus I knew that saying I was short of a member of staff wasn’t a justifiable excuse.

As I travelled home, oblivious to the glue stick stuck to my behind, I realised that if the next day was similar I would have to make a change. I would have to take a day off… from being a ‘child centred’ practitioner and use some ‘old school’ techniques.

So the next day rather than setting up my usual open ended activities I hid favourite resources out of harm’s way. Instead I photocopied pages from an old discarded colouring book that I found at the back of the cupboard. When the children arrived, they were herded straight onto the carpet. A few tried to engage me in conversation about the weather, but I put my finger to my lips and said “Shush… We’re playing ‘Old School’ today “.  And ‘Old School’ was all about following instructions.

The children were sat in a large circle and I asked them to sing the ‘Hello’ song… several times… slowly. I then explained their tasks for that day. One child asked if he could design a magic umbrella in the creative area. I said no. I reminded him to put his hand up if he had any further questions. He looked nonplussed and started sucking his thumb. The rest of the class sat silently listening to me explain the tasks. No one tried to jump up quickly before I had finished talking. I was surprised by the children’s enthusiasm to do these dull tasks. But they had no choice as the outdoor play area was closed.

The session was spent rolling readymade playdough with limited tools, colouring in work sheets, counting cubes all under my surveillance. I directed the activities better than a Butlin’s Redcoat, although at this point even I was beginning to feel a little bored. Eventually I lined them up like a mother duck and took them for a rainy walk outside. They shuffled along in a bemused line with every zip and hood and button done up. Snacks were served to the whole group, with me pouring drinks and delivering ‘thank you’.

At the end of this really controlled day I felt calm, collected and clean. Parents were very pleased to see dry, smiling well fed children who were also proudly holding their ‘colouring in’ sheets.  But I’m sure that very few of my children’s prefrontal cortex neurons would have be ignited by that day’s learning. However everyone seemed happy enough, so on one level it was job done. I even left on time because the classroom was spotless, but as I walked away I realised I also had precious little inspiration for next day’s planning.

One day off was enough. The following day it was all back to normal.  A mixture of fun, freedom and a really fulfilling focus activity thrown in. But I was shocked and amused when some of the children asked if we could play ‘old school’ again.  I couldn’t help but think that they would be in ‘old school’ soon enough.

Ideas for Improving our wellbeing