Thousands of early years practitioners descended upon London Olympia on 3 & 4 March for two days of breaking news, exclusive features and special guests. With a 30% increase in visitor numbers from 2016, exhibitors were welcomed with a surge that did not cease throughout the day. Stands for the show had sold out two weeks in advance, the first time this has happened, filling the room with a variety of resources and services specifically designed for the sector. Inspiring conversations and impressive sales taking place after the show had closed proved that the organisers of Childcare Expo truly outdone themselves this year. 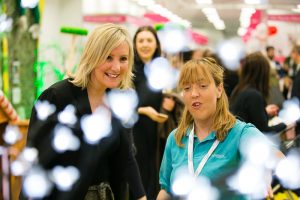 On Friday, Caroline Dinenage, Early Years Minister announced exclusively to over 100 people in her keynote, the U-turn changes made to GSCE requirements for early years workers. The news was welcomed with a cheer that could be heard around the exhibition hall. This soon spread like wildfire across the media and gave Childcare Expo London an unexpected boost the following day. With record numbers on Saturday alone, left smiles on everyone’s faces as the early years community united together once again.

With the addition of another seminar stream into the programme, speakers were delighted to be greeted by a room full of people eager to learn, as many sold out in capacity. Early years practitioners heard from leading experts in the industry including many new faces to the arena including June O’Sullivan, John Warren and Dr Sue Allingham. Laura Henry also popped by to do a book signing on Saturday, creating a never-ending queue down the aisle for the hours she attended.

It wasn’t only the educational seminars that were packed out, the interactive workshops saw the highest number of participants getting involved in EYFS dance and movement, holding snakes and cockroaches and piercing balloons without making them pop. 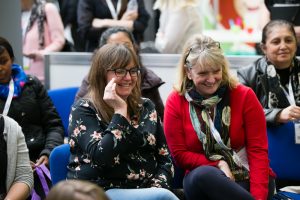 The feedback received so far from both sides of the fence has been overwhelming and comments continue to roll in. Emma Barrett, Event Director explains,

“We cannot express our gratitude enough to all those who attended to make this year the best event yet. We would like to thank our visitors, exhibitors, headline sponsors, Caroline Dinenage and the event staff for helping create such a wonderful unified event. Our thoughts are on our upcoming Manchester show and we hope to see the continued support as we head up the country.”

Childcare Expo is returning to EventCity on 16th and 17th June 2017 following the success of its launch last year; register for your free tickets today!