Saturday Morning Cinema – Come and Save Our Superman by John Warren

When my children were younger we loved to go to the Saturday morning cinema, WHY, because we could afford it, we could buy popcorn with the money we saved and the cinema was usually only half full at most so a very intimate venue.

However we couldn’t really celebrate and share the experience because most people had seen the film before and we probably knew the end already. If we had been told at the time we could have the same fun experience, for the same price, in an intimate venue but watch a film premiere then we would have been amazed and run to the cinema, wouldn’t you?

Well that’s exactly what happens at Childcare Expo, seminars that you would pay big money for, to listen to the big names in childcare, giving some premier seminars to you at affordable prices. Alongside this is the great exhibition hall with some fantastic exhibitors. 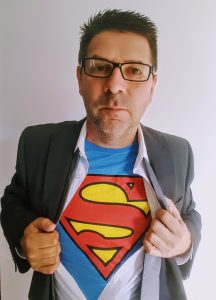 London was my first opportunity to speak at Childcare Expo, I woke up Saturday morning feeling extremely unwell, I travelled to the venue alone and didn’t feel much better. However the welcome I got from the expo team was amazing and I started to feel a little better. My workshop was well attended by a fantastic audience who were literally in touching distance, well they were definitely in catching distance as they were able to catch tennis balls and throw them back with accuracy (my workshops are usually interactive). It was a premiere of my listening to children workshop and the feedback I received in real time was well worth the journey and fighting off the bug. I am glad I used my inner superhero strength to fight off the awful MAN FLU (typing can be difficult with your tongue in your cheek)

This year I am back again and I am bringing Superman, he is in severe and real danger of having his wings clipped. When I was younger the biggest danger to Superman was Kryptonite it sucked out all his power and prevented him from fighting crime, flying faster than a speeding bullet etc. As I grew up I suppose his biggest threat was my imagination and me growing into a non-believer, I had peer pressure from others and it wasn’t grown up to believe a man could fly or that wearing your pants outside your clothes was trendy. As I found my feet in childcare and had children of my own it was okay to believe we could fly and save the planet from the baddies. Then health and safety came along and decided it wasn’t safe to fly and it was wrong to use laser vision to or any kind of weapons. Now, this view is still held by some who do not see the benefits of superheroes and the imagination and joy they bring to children’s play, helps them to create wonderful stories, care for others, understand rights and wrongs, healthy exercise… the benefits go on and on. The usual “we don’t play with guns here” was heard throughout all nurseries in the land.

It has taken time for people to accept the benefits of superhero and weapons play and up until the end of last year I believed we were making progress, there were still some heated but professional debates on social media. I realise not all embrace this type of imaginary play (not that it is the imagination of course as we all know that superheroes are real) but that’s ok we have an excellent early years community with diverse ideas but we have respect for others even if we don’t totally agree. The thing that binds us is our passion for children to have fun, enjoy their time being small and have a real love of learning.

Then from out of the blue comes something that is more threatening that kryptonite and has struck real fear into any child who dares to fly, use a banana as gun, the plastic pineapple from the home corner as a grenade, plays dead on the floor or points their finger at their friend and fires the imaginary gun accompanying it is a noise that sounds like a raspberry and the biggest injury incurred is usually a shower of spit. This threat is worse than the death eaters attacking Harry Potter and far more sinister.

The threat now is Prevent Duty and wow oh wow does it prevent and cause fear. Why? Well come along to the expo in September and find out why and at the Saturday Morning Premier see Superman take on his biggest enemy yet, will he win, will he lose, is this the end of flying around the nursery with pants on the outside of our trousers or do I have a very cunning plan to assist him in his hardest battle of all time? Your help, attendance, engagement, voice, laughter would be most welcome. If you want to keep superheroes in your nursery then come spend an hour with me and ensure that he flies to infinity and beyond, ensure bananas aren’t always used as a food, let children use their imagination to the full without fear and allow them to fly to the stars.

To find out more about John’s seminar, click here. Seats are limited so book in advance to avoid disappointment.

Engage the senses with TTS at Childcare Expo Midlands

What is a balanced diet for children? By Sarah West
Scroll to top
LONNORMID