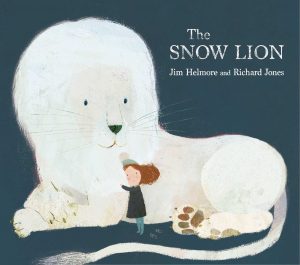 Caro has just moved in to a new house with her Mum, but rather than feel excited, she’s lonely and wishes for someone to play with.  Her new playmate comes in the form of a majestic white lion who blends in to the stark, white walls of the house.  Caro relishes this new friendship and the fun they have together.  Although her eye is drawn to the children playing outdoors, she is too shy to join in, much preferring the company of her lion friend.  The Snow Lion encourages her to go off to play with them, reassuring her that “I’ll still be here when you get back.”

Following Snow Lion’s comforting words, Caro ventures out to the park with the other children.  Although she has fun with her new friend, Bobby, she tells Snow Lion “but I missed you.”  With encouragement from the Snow Lion, Caro plucks up the courage to join Bobby and his other friends the next day.  They have so much fun building a ‘pirate spaceship kitchen’ and eating chocolate cake!

Caro’s uncertainty returns when her Mum suggests that they paint the walls of the house, inviting her new friends round for a painting party.  Would this mean that without the white walls of the house, Caro will never see Snow Lion again?  The brightly painted walls offer nowhere for him to hide, but then…what’s that outside?  The blanket of newly fallen snow is a perfect hiding place for the white lion who blends in perfectly.  He gently reminds her that she has other friends to play with now and “if you need me, you’ll know where to look.”  Caro certainly knows where to find him – he’ll always be there in the white of the clouds, watching over her.

The Snow Lion is the most magical, heart-warming story which is perfect for snuggling up and reading aloud.  The beautifully simple text is wonderfully complimented by the subtle tones in the illustrations.  I love the understated way Snow Lion pushes Caro to be brave and have courage to venture away from the comfort he provides.  The idea that the Snow Lion will always be there for Caro, up in the clouds, is the most charming idea.  Absolutely beautiful.

This book review was written by Emma Davis. If you have a book you would like reviewed then get in touch with us today!