When I worked as a SENCO one of my responsibilities was supporting the children with SEND in regard to reaching specific smart targets.  Many years ago I used to occasionally take out Derek and Gino to the park – by myself with no mobile! Both of them loved the playground swings.  Their targets had been concentrated on turn taking, following simple instructions and expressing needs.  Both were also developmentally delayed in their physical development milestones. I didn’t doubt the advice of the professionals but it was certainly a struggle for all three of us to find ways to develop these skills within the confines of the class. 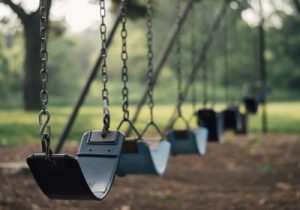 Derek was physically large for his age and needed a lot of support with his coordination. Gino had his own agenda and found aspects of Nursery life quite challenging. Gino also swore a lot and it was much to the relief of everyone when I decided to take him to the park with me. His anxiety always seemed to come out just before lunch. Staff would especially get cross with him at tidy up time. This is the point he would get really distressed, pushing children over, tipping things out and throwing things. On days when staffing was low it seemed wise to give them both a quick run over the park before lunch time began.

I used to have a route around the perimeter of the nursery fence which both of them knew well. We would then follow the path in random ways each time, find a short cut and cut through the grass.  We would then spend 15 minutes sliding, climbing, spinning and swinging completely free from the constraints of tidy up time and the rest of the world.

After one session as I gave my 5 minute notice “we are going back to Nursery soon”. Gino frantically decided he needed another 10 pushes in the bucket swing. Derek lifted his arms up to indicate he would like a further few pushes too. After another thirty pushes with an extra final one thrown in, I helped Gino climb out then went to Lift Derek. I thought he must have grown overnight as I struggled to move him. I tried to remind him to bend his legs a little, to try and help but for some reason this action just didn’t work today.

After 5 or so minutes I began to worry. Gino, who was stood waiting, began to get anxious and suddenly joined in trying to lift and tip Derek out. Derek was laughing for the first time in a while and making noises that sounded like “bend your legs Derek” in unison with Gino and I.

More time elapsed.  The park at this point had become the most eerily silent patch of grass in North London. I couldn’t hear any noise from the nursery either as they must have all gone inside for lunch. There were no parents, childminders or other mums with children walking past. Not even the odd hoodie kid to call upon. Now I was really worried. At this point both of us were now trying to coax Derek out. “You can do it Derek” praised Gino. “Come on just bend a little. We are trying to help you here”

I realised the seriousness of this situation when Derek stopped smiling, raised his arms and clearly said “up peese”

Even Gino stopped, stared at me in surprise and almost looked sorry for Derek’s predicament.  I looked to the skies and said a silent prayer. I shouldn’t have come out on my own. I should have waited until there was enough staff to support me. I was starting to feel frantic.

But at just that moment of mounting panic I saw Derek’s mum strolling along the perimeter. She was on her way to collect Derek for lunch.  After spotting us she cut across the grass smiling.

Derek instantly relaxed and we wriggled him out of the swing so smoothly it felt like we had imagined the last half an hour. “Hello,” said Derek’s mum unaware of the experience we had been having for the last 30 minutes, “did you have a nice time?”

Derek smiled happily and waved his arms a bit. Gino clutched my hand as if to say ‘can we go now’. After a few seconds Gino responded to Derek’s mum. “He’s been flipping stuck in there for the last flipping 30 minutes… and I really need my dinner now.”

We all left together back to the nursery.  Over lunch whilst Gino was sitting happily, confidently holding court with his peers, telling them the story and what he did to help. I browsed through the brochures to see if we would be able to afford a swing for our garden area. I also ticked Gino’s and Derek’s smart targets as met.

My professional evaluation on the whole experience was that I would not take out both of these children unaided in future. However, apart from my own lack of self-discipline, I felt very positive about the trips as a whole. I realized that our Movement play had had an enormous effect on their development over the term.

We now know that the more a child moves the more the brain is stimulated to grow nerve networks.  So let’s remember we don’t have to overtly teach children – for example structured movement sessions -to expose them to certain sensory and movement experiences. Children are born with a strong urge to play.  They naturally seek out movement and sensory experiences.  The more a child moves, the more their brain is stimulated to grow and build neural networks! We just need to encourage them to move more and sit less.