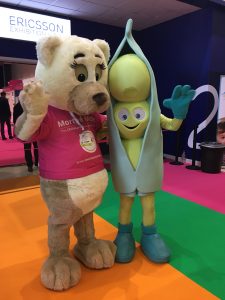 From the 29th to 30th September 2017, over 1,500 visitors were greeted by a pea and a bear (you can’t make this up!) as the doors opened for the established early years event in Coventry. The show first arrived back in 2010 and has since built its reputation around the engaging experiences it provides all visitors along with the exhibitors who attend.

With so much happening throughout the exhibition hall, it’s difficult to pinpoint a handful of inspiring memories made across the two days. Speaking at the show was early years consultant and legend Alistair Bryce-Clegg who encouraged everyone who attended his sell-out talk to change the way they think about EYFS. His passion and drive were evident throughout Friday morning as the audience laughed, nodded along and cringed at the truthful situations all childcare professions have encountered during their lifetime.

Ben Faulks, better known as Mr Bloom, was also present on opening day as he accompanied the popular EYN Pea, the Early Years Nutrition Partnership mascot, ahead of their first birthday celebrations later that afternoon where Ben treated the audience to a dedicated song on nutrition.

Twinkl found themselves swamped by visitors and fans who were eager to get hands-on with the craft activities available. Early Years practitioners had the opportunity to create superhero masks before receiving their free capes to allow them to fly around the show picking up new resources and suppliers to take back to their settings.

Whilst all the commotion was taking place, visitors were sat hearing from leading names in the industry, watching a multi-sensory theatre show as well as using mud to create a gorgeous elephant to name a few.

The dates for next year have been confirmed and can be found on the website. If this year has anything to go by, then early years are in for a treat next year! See you all in 2018.

Is it easier to be inclusive in Early Years? By Hayley Smith