My experience of Childcare Expo by Louise Smith

As I stepped off the packed Saturday train at Olympia I didn’t know what to expect and was vaguely aware that I was growing increasingly late for my seminar booked for 10:45am. I had been to education exhibitions before but always with colleagues, this was me, an empty bag and a badge. Incidentally, the train was packed with a startling mix of zombies and folk like me with large empty bags (I later found out to my relief that it wasn’t an apocalypse, but another exhibition based on The Walking Dead).

I pushed through the crowds following the handy light blue sign posts to Childcare Expo, almost running like someone who didn’t spend their day ‘just playing’ but like someone with important meetings in boardrooms with conference calls. I entered the lift willing it to hurry up, clutching my badge which I had printed and badly folded at home. (Would defiantly recommend printing it at home to save time especially if you are likely to spend longer eating breakfast than you rightly should). 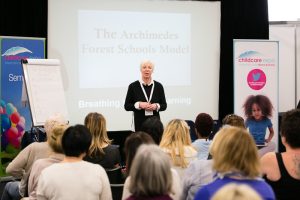 A man was welcoming me and scanning my badge when I noticed the closed doors of the seminar room. To my surprise, I had made it on time and I found a seat near the back. I was going to listen to a talk on Forest Schools. Being a Forest School Leader I found it really hard not to shout out and nod enthusiastically like so many of my children during story time. It gave a brief introduction to the Forest School ethos and allowed some delegates to have a go with some knives. I found it reassuring that so many practitioners were interested in Forest School and listened so keenly to a clearly passionate speaker. It was, without doubt, the most worthwhile part of my day. Simply being in a room with so many like-minded people is invaluable as an Early Years practitioner.

I could hear the hustle and bustle of the exhibition going on outside the cleverly constructed walls of the seminar room, I felt myself becoming increasingly eager to get out there in case I was missing something. I snuck a look at the handy free map and decided to go systematically up and down each aisle so that I didn’t miss anything. What I didn’t factor in, was the vast amounts of people doing the same.

There was a good mix of bargains, information and ideas. The bargains had the biggest crowds so I waited until the afternoon when it was quieter to visit those and would mean less to carry. I was pleased to see lots of universities and colleges offering practitioners the chance to progress their careers. My favourite part was the Learning Zone which was set up like a nursery before it opens its doors to the children. I witnessed lots of practitioners taking photos and ideas back to their own settings. 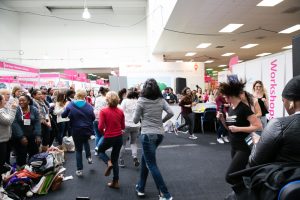 After wandering around every stand twice and enjoying a fantastic latte, I joined a dance workshop where I was given a bindi to wear on my forehead and took part in a Bollywood dance. This was great fun and I have since used some of the skills I learnt in my own setting.

I hopped on the tube with the returning zombies when the expo closed, to head back to my hotel. A few people staring at me, I guessed because I looked laden with free bags, catalogues, leaflets, new ideas and inspirations, but actually because I had forgotten to take my bindi off and I’d somehow wiped it down onto my nose.

Attending Childcare expo reminded me that I am part of a much bigger and wider community of Early Years practitioners, that each and every one of us was passionate enough about what we do to travel to London off our own backs to improve the life chances of the children we teach. I would recommend attending, if only to remind yourself that you are not alone in this sector, that you don’t need to work in a bubble and that there are lots of people out there just as willing to get covered in glitter, pretend to eat a playdough cake, talk seriously to a puppet and sit on the tiniest of chairs as you are.