Following many requests for a schemas resource, the Early Years and Childcare Publications Partnership (EYCPP) have now launched two new guides covering Schemas. One of the authors, Gail Ryder-Richardson, will have these available to view after she runs her seminar ‘Supporting Children’s Schema Outdoors’ at Childcare Expo London taking place at Olympia on Friday 4th March. 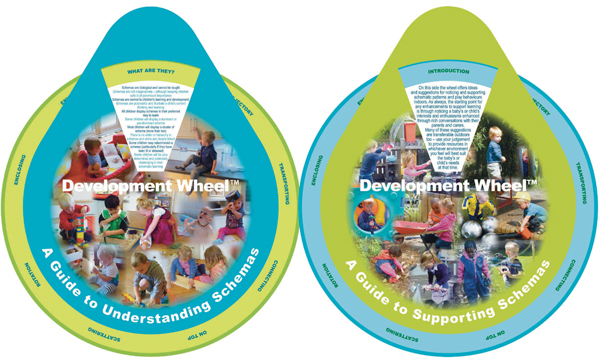 One of the Development Wheels explains schemas in their ‘Understanding Schemas’ wheel, whilst the other wheel offers ideas and suggestions for noticing and supporting schematic patterns and play behaviours through their ‘Supporting Schemas’ wheel. They have been written by schemas specialist Stella Nalini and outdoor play specialist and early years activity trainer Gail Ryder Richardson. Whilst Stella is new to the partnership, Gail was also instrumental in the development of their Outdoor Play Wheel which was launched at Childcare Expo in 2013.

The ‘Guide to Understanding Schemas’ starts off by explaining in one section what they are and why schemas are so important. The wheel has eight other sections on each side covering the following areas; Trajectory, Transporting, Connecting, On top, Scattering, Rotation, Enclosing and Enveloping. Under these headings, one side of the wheel describes how a child might be recognised as having an enthusiasm for one schema more than another, whilst the other side focuses on the potential learning within each schema.

The ‘Guide to Supporting Schemas’ wheel offers ideas and suggestions for noticing and supporting schematic patterns of play and behaviour. Again using the eight areas used in the Understanding wheel, one side of the wheel suggests activities that can be done inside the home or learning environment, whilst the other side focuses on the outdoors. A number of the ideas and suggestions can also be used in both environments.

These two new Schemas wheels mean that there are now ten early years wheels within the portfolio. The very first wheel was a general birth to five parenting guide that also includes information on keeping young children healthy and safe. Since then other titles have included Speech, Language and Communication (SLT), the integrated two year progress check, a Pre-birth (antenatal wheel and a new Postnatal Health (PND) wheel which was launched last year and which has been endorsed by the Institute of Health Visiting.

The Outdoor Play Wheel was launched at an earlier Childcare Expo event, since the launch, the wheels have proved popular across the country and are used in children’s centres, settings and by health visitors. They’re also used by childminders, early years practitioners and parents/carers. And, as word has spread, other local authorities, health organisations and family support agencies have commissioned their own copies of the wheels with their details printed on the back.

All of the titles in the range are also available online. You can visit their website at www.earlyyearsandchildcarepublications.org for details of the complete range.

Wendy Beeton, who is now head of early help and intervention at Bedford Borough Council and has been involved with the partnership since the beginning and said, “Having developed these wheels, it’s great that we can now share our work with other authorities who might be considering similar projects. The beauty for other authorities, children’s centres and health partnerships is that everything has been done and these wheels can be produced immediately, saving on the time and costs associated with a project such as this.

“The positive feedback we have had has been brilliant and I think that’s because these wheels are a bit different and are so easy to use.”

Click here to register for your free tickets to the show.

Visit The Wild Place to Play at Childcare Expo