Following its popularity at previous events, the Early Years Breakfast Summit will be returning to this year’s Childcare Expo Midlands in September, where it has been announced that Purnima Tanuku OBE, Chief Executive of the National Day Nurseries Association, will chair the summit. 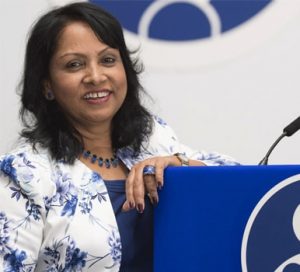 Childcare Expo introduced the Early Years Breakfast Summit in 2013, and since then has successfully brought together leaders in early years to discuss current topics and challenges facing the sector.

Purnima Tanuku is a well-recognised voice in the industry; regularly negotiating with government ministers and local authorities, and having made several appearances on national television and radio in an attempt to raise public awareness and lobby for better support for nurseries and their children. At this year’s Early Years Breakfast Summit, Purnima will be giving an opening address before setting out the topics of discussion for the day.

Attended by a number of leading childcare providers, the summit provides an opportunity for people from across the sector to come together to network and share ideas, and discuss current issues and concerns in an attempt to find potential solutions. Previous sessions have covered everything from funding, recruitment and Ofsted inspections, to the government’s “30 hours free” initiative – however the topics for this year’s summit will be decided closer to the event, ensuring that the issues discussed are as relevant and up-to-date as possible.

Shadow Early Years Minister, Tracy Brabin MP has also been confirmed to give a keynote speech and will be officially opening the show on Friday 28th September. Other special guests due to attend include former children’s TV presenter, Dave Benson Phillips, and Ben Faulks (also known as Mr Bloom from CBeebies), who will be teaching visitors how to play the ukulele in the new Health & Wellbeing Zone.

Free tickets are now available for Childcare Expo Midlands, which returns to the Ricoh Arena in Coventry on 28th – 29th September. Click here to register today, or call 01425 838393.

Book Review – Sorrel and the Sleepover